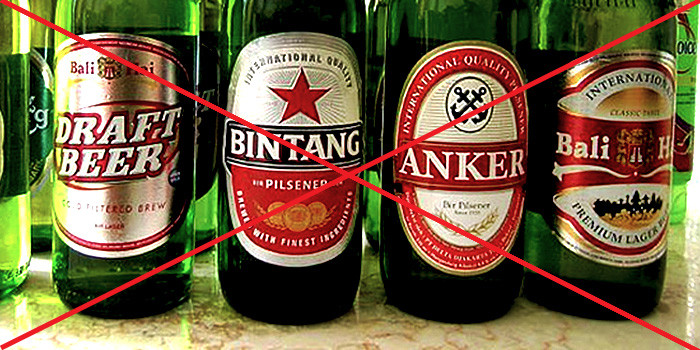 Indonesia could soon become the second nation in Asean to impose a nationwide alcohol ban with a proposal to that effect now before the country’s national legislature.

Two Indonesia Islamist parties – the United Development Party (PPP) and the Prosperous Justice Party (PKS) – have introduced the Alcohol Prohibition Bill to parliament. If passed it will make it illegal to sell, distribute, and to consume drinks with more than 1 per cent alcohol content. While the bill includes exemptions for travelers, customary activities, medical use, and religious rituals, violators will be subject to a jail term of up to two years.

Claimed to have been drafted out of concern for people’s health, Abdul Hakim of the PKS told Reuters: “This is not a religious or ideological issue. This is purely for the protection of the children of the nation”.

After being left hanging for some time because of disagreements among lawmakers and opposition from affected stakeholders, the proposal is now being considered by the House of Representatives (Dewan Perwakilan Rakyat (DPR)). The move has sparked a raging debate, not only within the halls of parliament, but also between its supporters and opponents.

Firmly opposed to the bill is Indonesia’s tourism and hospitality industry who warn that such a move will discourage tourists from visiting Indonesia.

Hariyadi Sukamdani, head of the Indonesian Hotel and Restaurant Association (IHRA), said the proposed Alcohol Prohibition Bill bodes ill for the tourism sector. “If the bill is passed, our business will be done”, he said.

Almost 10 million tourists visited Indonesia in 2015 and the government aims to double that by 2020. To help achieve that, Indonesia scrapped visa requirements for an additional 84 countries this year. An Indonesia alcohol ban is seen by many as undoing the benefits the easing of visa restrictions are expected to produce.

The Indonesia liquor industry is understandably up in arms over the proposal. PT Multi Bintang, the largest domestic brewery in Indonesia and bottler of Indonesia’s best-selling beer, Bintang, has put expansion plans on hold because of uncertainty created by the bill.

Indonesia is the tenth-largest beer consumer in Asia with sales having spiked 54 per cent over the past decade, with beer accounting for 92 per cent of all alcoholic sold. Other local liquor manufacturers include Delta Djakarta and PT Bali Hai Brewery Indonesia, while foreign liquor suppliers with a strong presence in the country include Diageo, Pernod Ricard, Remy Cointreau, and Bacardi.

Indonesia Malt Beverage Producers Association (GIMMI) executive director Charles Poluan told The Jakarta Post that a ban will doom the industry, forcing manufacturers and their supporting distribution chains to close, directly affecting up to 2,000 workers and indirectly 200,000 in the sales sector alone.

Annual production of alcoholic beverages is valued at around US$434.28 million (Rp5.7 trillion). The industry also brings in $453.68 million (Rp6 trillion) in excise (sin) tax per year. Wines and spirits attract 150 per cent import tariff, while class B alcohol products with between 5 and 20 per cent alcohol attract 90 per cent “sin tax”.

An Indonesia alcohol ban is also likely to spur the growth of black market alcohol, products that have deadly consequences.

The increasing cost of importing liquor, along with increases in ‘sin tax’ has seen a rise in the sale of home-brewed spirits, not infrequently which have been laced with methanol. The lethal concoctions has caused the deaths and serious permanent injury of more than a handful of tourists to Bali and Lombok in recent years, with more continuing to fall victim annually.

According to the Sydney Morning Herald Indonesia saw a 58 per cent increase in illegal alcohol sales after it banned alcohol sales by mini-markets last year.

While many in the Indonesian tourism industry scoff at the notion of an Indonesia alcohol ban, pointing to the $33.479 billion (Rp443.231 trillion) that the tourism industry contributed to 2015 Indonesia GDP – about 4 per cent – they ignore the fact that a significant number of Indonesian visitors are from Muslim countries already. What tourists are lost as the result of an Indonesia alcohol ban would likely be filled by those from countries where alcohol is already banned or heavily restricted for religious reasons – Brunei, Bangladesh, Iran, Malaysia, Yemen, Sudan, and Kuwait to name just a few.

Although officially secular and tolerant of other religions, 87 per cent of Indonesia’s 250 million citizens are Sunni Muslim and sectarian clashes and oppression of religious minorities is not uncommon. Moderation and secularism are also under challenge with rise of Islamist political power, and the proposed Indonesia alcohol ban comes as Islamist-oriented parties gain ground in the sprawling island nation.

While shunned for much of Indonesia’s political history, Islamist parties performed well in the 2014 Indonesian general election. Although secular and nationalist parties Indonesian Democratic Party of Struggle (PDI-P), Golkar, and Gerinda were the top vote-getters, four Islamist parties were not far behind winning a combined total of 32 per cent of the vote and 175 of the 560 seats in the House of Representatives.

The increasing influence of the Islamist parties is reflected in the decision by Indonesia to last year to ban the sale of alcoholic drinks in mini marts and other small shops. Alcohol consumption is prohibited in the Muslim faith and is seen by Islamists and their adherents as the root cause for many social ills.

Last year, there was also a proposal to ban cohabitation among unmarried couples. Introduced by Islamist parties the proposal was supported by the government.

The Islamist and conservative movements are also gaining ground at the local level leading to the provinces of Aceh and Papua, along with the port city of Surabaya in Java introducing their own alcohol bans.

Regulate Instead of Ban

Fearful of its consequences those in the Indonesia alcohol industry are asking the government to impose tougher regulations on the sale of alcohol rather than a nationwide ban, pointing to Malaysia where Muslims are barred from buying or drinking alcohol, while non-Muslims are not.

But for others such a proposal is not seen as enough to stem a tide of fundamentalism and concern over alcohol-related health problems and social ills. They instead point to Brunei, where about 30 per cent of the population is not Muslim, but which introduced a ban on alcohol sales in May, 2014.

Adding to the gloomy prospect for the tourism and alcohol industries is that to date none of the non-Islamist parties that hold the majority of seats in the House of Representatives have shown any particular resistance to the Alcohol Prohibition Bill.

A Long Shot or a Distinct Possibility?

While claiming an Indonesia-wide alcohol ban is unlikely, Ross Taylor, president of the Indonesia Institute told news.com.au that he wouldn’t be surprised if it went ahead in provinces with more hard line governments, such as East Java and North Sumatra.

Support for the ban is not limited to Islamist groups and their followers. “There’s a lot of discussion in Indonesian society about the damage [alcohol] does to the wider community. There’s a lot of people in Indonesia right now taking the view – and they might not be wrong – that if you look at the Western world, and what alcohol is doing to young people, we don’t want that in Indonesia and we want to ban alcohol”, he said.

Recent alcohol-related crimes are also fuelling calls for a total Indonesia alcohol ban. The gang rape of a young schoolgirl from Sumatra in April, allegedly perpetrated by 14 drunk youths, being one example, while it is alleged that alcohol played a significant role in the bludgeoning to death of Indonesia police officer Wayan Sudarsa on a Bali beach last week.

While the notion of an Indonesia alcohol ban might appear far-fetched at first glance, especially to the legions of Australians who flock to Bali and often behave badly as a result of excessive alcohol consumption, it remains to be seen whether the sort of compromise that Indonesia is famous for finding to such a thorny topics can be devised.