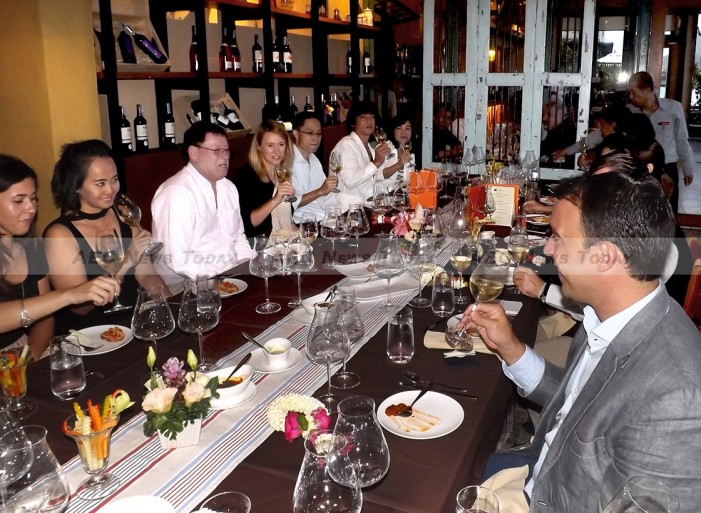 Attending wine dinners in Bangkok is nothing new to this journalist. These affairs usually feature one winery and one winery representative, often a sales person, and many consumer attendees who are out for a good time fueled by the presence of good wine and food.

However, one event this past week shattered my previous perceptions about wine dinners. This wine dinner brought in yes, some sales and marketing personnel, but there were also a few winemakers representing their respective wineries, while the wine marketers were flown in from their home countries and not personnel scattered around the globe far removed from the daily wine-making process.

Presided over by Napaphan Ruengrod of Napaphan Wine Cellar (who the following evening presented the Thailand Wine Expo 2015 for the general public), what made this wine dinner at the East Side Story restaurant at Arun Residence exceptional was the quality of discussion among the guests who truly ‘knew their stuff’.

The first person I ran into was Rob Frewer who farms his 25 ha. (50 acre) Jones Road wine estate on the Mornington Peninsula southeast of Melbourne, Victoria.

Mr Frewer said the peninsula is a coastal playground for many Victorians which assures wineries a good flow of cellar door traffic, particularly on weekends.

Mornington has an interesting viticulture history. According to Mr Frewer vines were planted there and then torn up in the 1950s. Eventually vines were again planted with the cool maritime climate seeing Chardonnay and Pinot Noir the preferred varieties.

Due to its commonality on store shelves and the hundreds of abundant mediocre Chardonnays being produced, Chardonnay is not my favorite call. But artisan well-made Chardonnays as presented by Mr Frewer are in a different class altogether.

The first Chardonnay to appear at the ‘Wine Pro Dinner’ was a Jones Road regular bottling 2013. The wine had real character balancing the innate lushness of Chardonnay with well-tempered acidity and a sandalwood bouquet due to its aging in French Allier Vosges barrels.

The reserve bottling, called ‘Nepean’, is made from a single block of Chardonnay in the Jones Road estate. The extended period of aging in barrels and the more intense flavor from higher-quality grapes gave this wine more body and a lingering aftertaste that would put it at the top of most of the Chardonnays I have tasted for some time.

According to Mr Fewer less than 50 barrels of this wine are produced each year so anyone wanting a bottle needs to act quickly. At the “Wine Pro Dinner” the very excellent Chardonay was accompanied by homemade bruschetta and vegetables.

Moving to another part of the room I found myself seated next to Benoit Trocard, whose family has been involved with Clos l’Eglise in the French wine growing commune and Pomerol AOC (Appellation d’origine contrôlée) within the Libournais (“Right Bank”) in Bordeaux since 1620. Situated near a 19th-century church, the vineyard is surrounded by a cemetery.

Generally I am not a big fan of Merlot since it is difficult to find examples that are well-made. Most Merlots, especially from the “New World”, tend to lack character and come across as soft with few flavor peaks or the opposite; strong-flavored wines with high alcohol.

However, Merlot from Pomerol in Bordeaux is something quite different. At its peak Merlot can be a lush and voluptuous wine that can age well and this was evident in the 2011 Clos l’Eglise.

Comprising a blend of 70 per cent Merlot and 30 per cent Cabernet Franc grapes, the 2011 Clos l’Eglise spent 18 months in new oak. At only four years of age this wine seemed young, but Benoit said that it had been de-corked quite a time to allow it to soften for the ‘Wine Pro Dinner’.

This wine restored my faith in the beauty of Merlot – opulent and elegant at this tender young age, there is no doubt that this wine would have improved with more bottle age. Nonetheless it was gratifying as it was. Accompanying the Clos l’Eglise was a choice of  roasted salmon or grilled Australian sirloin beef.

In between these two wines was a 100 per cent Sangiovese regional wine by FICO PURO in Tuscany which demonstrating a resonant rendition of this variety proving an exquisite accompaniment to either the Japanese mushrooms and a deep-fried spring roll, or grilled pork with honey.

Grown on the Bricco Quaglia hills in Bionzo, a small hamlet of Costigliole d’Asti, the 100 per cent Moscato exhibited an intense hay yellow colour, accompanied by a luscious scent of spring flowers and honeyed melons/apricots, its light body and fresh, delicate flavors exploded on the palate making it a perfect accompaniment to the mango and sticky rice desert.

Those interested in attending a wine dinner should keep their eyes on the Bangkok Post Life section where such events are generally announced. Wine dinner evening cost between Bt2,000 and Bt6,000 (US$59 – $176) depending on the venue and the quality of wine being sampled.

As in keeping with the traditions associated with such events a suit and tie are generally mandatory, though smart casual attire is the new trend.

Unfortunately, due to a clamp-down by the Thailand Ministry of Public Health (MoPH) on alcohol promotion these events are not as frequent as in the past.

Anyone fortunate enough to attend one of these events will without a doubt get to sample some very good wine and food; they will be even luckier if the event is graced by a similar caliber of wine professionals as the this Bangkok “Wine Pro Dinner”.