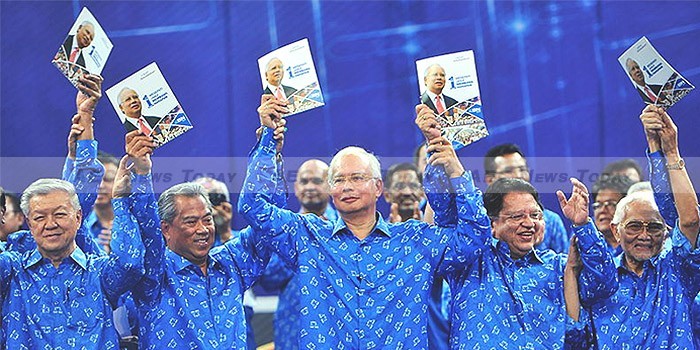 At least embattled Malaysian Prime Minister Najib Razak is right about one thing. The current mess in Malaysian politics is the making of his greatest nemesis, Mahathir Mohamad, who led the Southeast Asian nation with an iron fist from 1981–2003.

What Najib fails to fathom is that Mahathir has not produced this mess by criticising his leadership, but by paving Najib’s path to power in the fashion he did during his decades in office. Mahathir may believe that he can end the crisis by bringing Najib down. But history should judge Mahathir himself as the author of a long national decline that has culminated in this latest crisis.

To be sure, Najib’s fingerprints are all over the current mess. The proximate source of the crisis has been the collapse of Najib’s pet sovereign-investment company, 1Malaysia Development Berhad (1MDB). This has caused Malaysia’s stock market and currency, the ringgit, to plummet in turn. All this has transpired amid credible allegations that the prime minister siphoned an eye-popping US$700 million into his personal bank account.

But this road toward ruin commenced with Mahathir, not Najib. It is vital to realise that Mahathir rose to power in blessed circumstances.

Malaysia’s economy had been growing healthily for decades, thanks to the prudent economic management of a highly capable bureaucracy. Governance and tax collection were effective, and debts were few. Natural resource wealth, including oil, was professionally stewarded. A decade of muscular redistribution to the country’s ethnic Malay majority had restored social stability after the race riots of 1969.

Incoming foreign investment was copious and about to mushroom even further. Mahathir commanded one of the most cohesive ruling parties (the United Malays National Organization, or UMNO) and coalitions (the Barisan Nasional, or BN) in the world. The regime was authoritarian, but not intensely repressive or disliked in comparative terms.

In short, Mahathir was holding a winning hand when he became prime minister in 1981.

Then came the debt. Obsessed with following in the footsteps of Asia’s technological leaders, Mahathir began borrowing heavily to fund his ‘Look East’, state-led heavy-industrialisation program.

Privatisation was part of his growth package, but the beneficiaries were businessmen of loyalty more than talent. When the global economy went into recession in the mid-1980s, patronage started drying up. UMNO split, largely in reaction to Mahathir’s strong-armed style of rule.

Mahathir’s two most talented rivals, Tengku Razaleigh and Musa Hitam, bolted from UMNO despite their deep personal ties to the party, mostly to get away from Mahathir himself. Mahathir responded by launching a police operation under the pretext of racial tensions, imprisoning and intimidating political rivals, and cementing his autocratic control.

Hence by the late 1980s, all of the defining features of Malaysia’s current crisis under Najib’s leadership were already evident under Mahathir.

The Beginning of Malaysia’s Hurtling Decline

This was the beginning of Malaysia’s sad national decline, under Mahathir’s watch and at his own hand. Fast-forward a decade and all of these syndromes would recur in even nastier forms.

The Asian Financial Crisis of 1997–98 punished Malaysia for the unsustainable dollar-denominated debts it had accumulated under Mahathir’s single-minded push for breakneck growth. Mahathir blamed everybody but himself for the crash. He sacked and imprisoned his popular and gifted deputy, Anwar Ibrahim, largely for his temerity in suggesting that Malaysia needed deeper reforms to regain economic health.

Mahathir didn’t pull Malaysia out of its crisis with economic reform or adjustment, but with more and more borrowing and spending. This was possible because Malaysia was still sitting on the fiscal reserves it had been amassing for half a century, since the British colonial period.

Mahathir grandiosely claimed that his imposition of capital controls had saved the economy. But capital flight had basically run its course by the time controls were implemented. Mahathir imposed them to facilitate political repression as much as economic recovery. The spectre of anti-Chinese riots in neighbouring Indonesia was then callously manipulated to keep ethnic Chinese voters in the BN fold in the 1999 elections.

Hence even before the turn of the millennium, Malaysia was hurtling down the very trajectory of decline we are witnessing in the current crisis.

In sum, Mahathir has nobody to blame more than himself as he watches Najib drive Malaysia even further into the ground.

Neither Najib nor any of his current plausible replacements appear capable of reversing Malaysia’s decades-long decline. Herein lies perhaps Mahathir’s worst legacy of all. By forcing the three most capable politicians beside himself out of UMNO during their prime, Mahathir ensured that only relative lightweights would command leading positions in Malaysia’s most powerful political institution.

If Malaysia is to exit this crisis on a path to restored health rather than steeper decline, the political and economic reforms first demanded in the reformasi movement of the late 1990s will finally need to put in place: either by a new generation of leadership within UMNO, or by Malaysia’s repressed but resilient political opposition.

Dan Slater, is associate professor in political science at the University of Chicago. This article first appeared on East Asia Forum under a Creative Commons license and is reproduced here with its permission